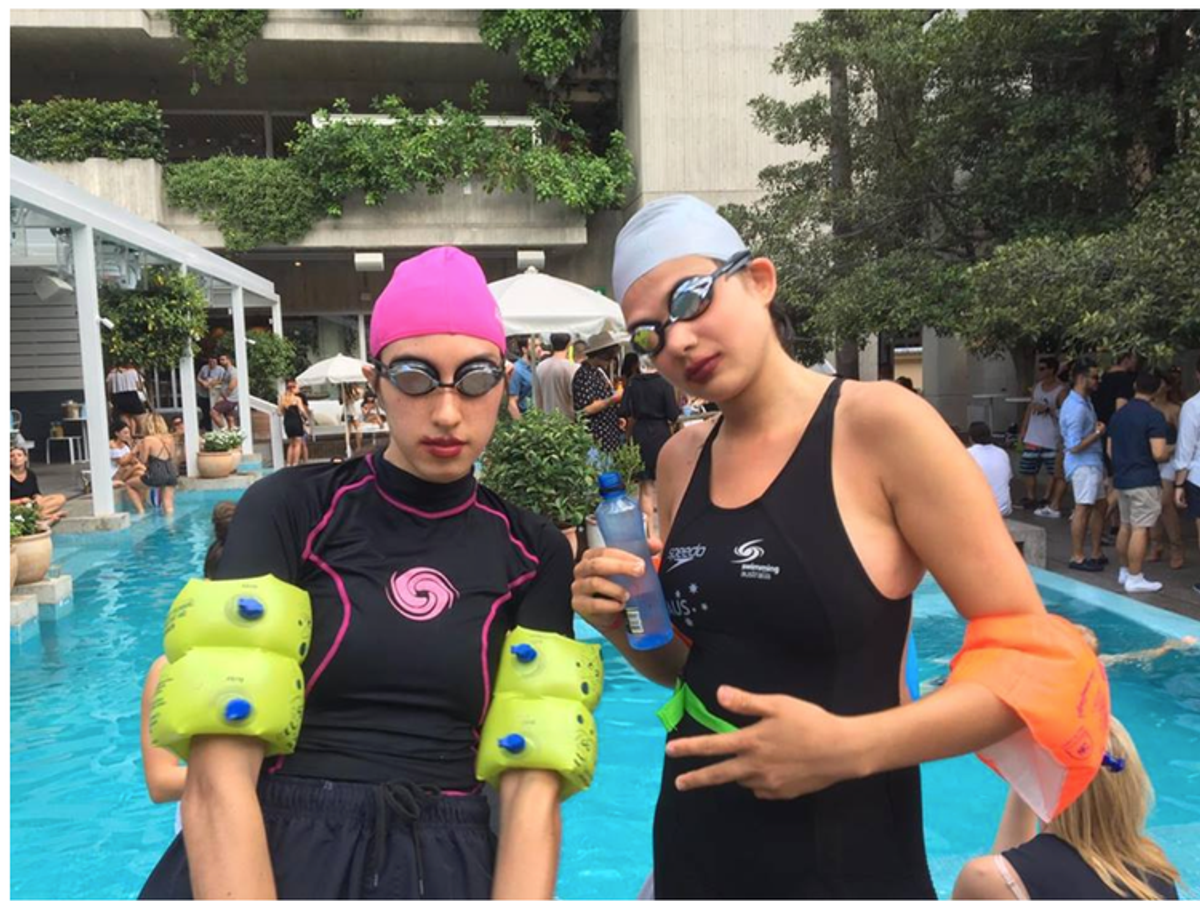 From George street, the Ivy’s music bulges outward and rings against Sydney’s cityscape. Its a deadened Sunday afternoon but the Ivy presents us with a salvation, ushering us from street side to Pool Club. The ceilings are lofty and appropriate for lengthened humans 11ft tall and our presence does nothing to fill out the of hollowness of excess space. Every surface is shaved clean with the blades of Gillette; the rest of our senses are overpowered by the aftershave of glamour.

The Ivy and so many other fanfare driven clubs convincingly present themselves as an access card to the Sydney dream, the dream of an everlasting beauty. For $22.90 second release Pool Club tickets and a trip to the H+M uniform shop, the Ivy proves that dreams can come true, temporarily. Dress codes are one of the many props that set the mood of the venues glowing utopian stage. Under the guise of glistening pretty, the code seems to harmlessly slide it’s way into acceptance. Though, when looking at the dictionary expression of the word ‘code’ – “a system of words, letters, figures, or symbols used to represent others, especially for the purposes of secrecy” – and applying the word ‘dress’ to this, it makes you think about the idea a little differently.

From the emptying bowels of tabloid magazines and into the hands of a venue, a dress code smears a glaze of its ideals over the surface of an individual. These same polished dreams posted in magazines and by venues douse our city. From conveyor belts of advertising inside bus stops, to the lobotomised interior of Town Hall train station, to our clothing, our cafes, almost everything in our built environment, it is all interlaced with some kind of codified content. It comes with an intent to bring forth targeted emotions and with the choice to express or subdue. The Ivy hones into this idea by narrowly limiting expression to a specific social class, the bourgeois. The outcome of this regulation feels strangely familiar to a school uniform. The ingrained feeling of a potential detention looms. We wait abidingly by the Ivy Pool in our ‘Ivy-esque’ attire.

The gravitational pull of like mindedness draws clusters of similar people together. In this comfort it allows us to nest in suburbs and subsequent subcultures. Sydneys North shore – a part of town, yes, on the growing upper-middle class end of the city, is a place my partner in crime Liz and I grew up in. Westfield and popularised TV shows handed us iterations of a Vogue lifestyle magazine – countering, were glimmers of a world beyond. We moved into a very different area of Sydney later in a lives and into the inner west. To experience two of the many different ends of Sydney’s subcultures thoroughly, is a great gift. In both their claims of superiority neither are completely exempt from judgment of the individuals in the subcultures outside their own. It is a stand off between Sydney and Sydney. It was from our experiences between the two area dominated subcultures, that we hoped to exchange the tightly woven nature of these clusters with the stretchy fibres of our silicone caps and rash vests.

In the island getaway shell that is the Ivy, our crevices were beginning to puddle with sweat and form their own pool club, it signaled the need to slip into something more comfortable. With lipstick rubbed across the moustache line, strapped with floaties, caps and goggles, Liz and I were swept in with acceptance and love by the attendees. Around us we noticed a reluctant compliance with the dress code. More prominently, the people we met expressed the wish for an audacity enabling them to do something just as wacky. The dress code for Sunday is a little more relaxed though pressures still linger. There were many happy to wear their Sunday best on the occasion and thats when specifications work. But it is the censoring of anything else that makes us retract away from honest expression and our potential.

When an environment submerges us in its narrated identity it rushes us to an idea about who we are before we have a moment to look inwards and know it for ourselves. Walter Gropius, in reference to our built environment and its radiating culture in The New Architecture and the Bauhaus (MIT Press, 1965) phrases his observations as a ‘movement (that) must be purged from within if its original aims are to be saved from the straight-jacket of materialism and false slogans inspired by plagiarism or misconception’. His words continue to ring with a loudening crescendo so relevant to our world now.

Subculture through the eyes of Morus Quin

To return true expression to the individual prevents us from hiding ourselves from ourselves and ourselves from others, it enables broad and honest connection. Through habit, we sink deeply into crowds of affirming similarities. Yes, subcultures attract people of similar political values, ambitions, cultural roots and aesthetics but there is more to human connection than this alignment. There are people of chamomile warmth and cold cubes of ice in each subculture, an important note that challenges stereotypes and segregation. The angsty battle between subculture vs subculture and Sydney vs Sydney is somewhat negating with the squashing of culture by the corporate world above us. If we want something done about the withering presence of culture in Sydney, it is with us that the responsibility lies. It is with the broadening of thought, that the utensils of creativity, humour and love will challenge our parameters and begin to revive Sydney’s culture. Keep Sydney open. Keep Sydney open minded.